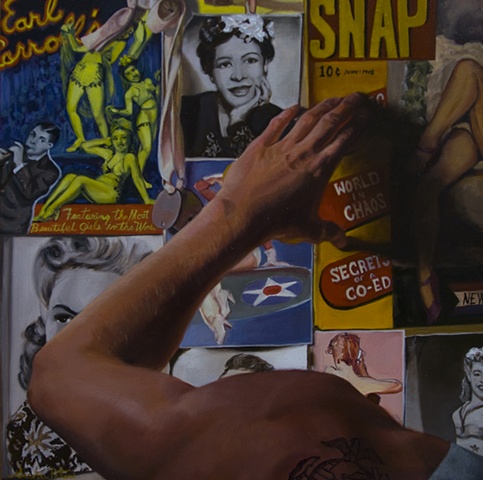 The composition for “Pin Up” came together after listening to my mother talk about life as a teen in Los Angeles in 1942 and dating my father, a Marine stationed at El Toro. Additional research on life in the USMC during this time period produced many images of men decorating their quarters, or the insides of foot lockers with photos of pinup girls and girl friends. As a result I decided that the pin up theme would pair nicely with the romance theme of the companion painting “Ten Cent Love”. My mother had talked of volunteering at the Earl Carrol Night Club on Sundays to dance with the enlisted men. I read more on Earl Carrol and his creation of the female ideal/icon of the day; he claimed to have discovered the most beautiful girls in the world. Each Earl Carrol Girl had to conform to a strict list of measurements and proportions. In the painting I have included a poster from Earl Carrol’s in the upper left corner, next to a pair of dog tags (notice the shape was unique to the Navy and USMC at that time period. In the upper center is a photo of singer Billie Holiday, who released “Wherever you are” in 1942. In the upper right corner is a popular men’s periodical from June of 1942 called “SNAP”, which includes articles such as “Secrets of a Co-Ed”, “World in Chaos” and “Defending Her Honor”. On each of the lower left and right corners are photos of actress Betty Grable, famous for her shapely legs. Second bottom on the right is a pin up by artist George Petty. This particular pin up was drawn the year before, but became the inspiration for many examples of US Military Aircraft Nose Art in 1942. Bottom center we see only the hair line of actress Rita Hayworth and in the direct center is a pin up by artist Earl Macpherson. At the very top center is a sliver of a pin up by artist Gil Elvgren.